RIVERSIDE, CALIFORNIA—More than a 1,000 runners—from ages 3 to 85—laced up Sunday to run the Half Marathon, 10k, 5k, and 1k Kids races. The course ran through Fairmount Park under the shadow of Mt. Rubidoux following the Santa Ana River and into downtown Riverside. At the end of the day, Jerry Sanchez won the men’s half marathon with a blazing fast time of 1:16:53 and Marcia Winrow led the women’s half marathon with a time of 1:33:00. 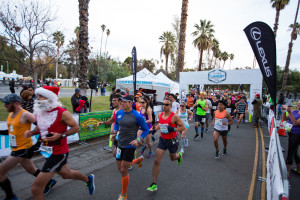 It was a beautiful fall day for the final race of the 2015 LaceUp Running Series in Southern California. After stops in Irvine, Ventura and Palos Verdes, Riverside brought out the entire family for a grand finale. There was father-son duo like Joe and Luke Vickers—Luke, 18, won the men’s 10k while Joe got 8th behind running sensation Jason Perra, 9, in the 5k. After their own races, many parents met up with their kids for the 1k Kids Race. About 50 kids signed up. Follow us on Instagram for videos and photos of that entertaining experience.

Participants posted more than 500 photos to Instagram during the event with hashtag #LexusLaceUp in a battle to win free Saucony running shoes and a chance to take home the grand prize—a Road Runner Sports gift card. Those photos were also automatically printed out at the Instagram Photo Booth for an added racer benefit.

After the race, participants made their way to the LaceUp Expo where they could relax in the Lexus Recharge Lounge for post-race massages and refreshing orange and cucumber water. Evolution Physical Therapy also provided massages and foam rollers for athletes. And of course, people enjoyed an array of food from four local food trucks including Mocha Lotive Express, Classic Tacos, Me So Hungry Food Truck and JoJo’s Grill-A-Dog and craft beer provided by Sierra Nevada. 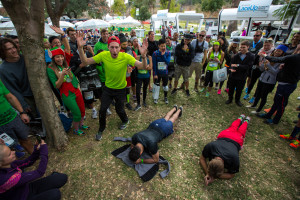 Saucony, once again held a memorable plank competition for a free shoe giveaway to the top female and male competitor. This event was particularly fierce as the crowd cheered and heckled their favorite athletes in the ultimate sufferfest. The winning male planker held the position for 10:43.

Overall, it was a great day to finish the season. Thanks to all of you who laced up with us this fall. Stay tuned for the 2016 schedule. Make sure to follow us on Facebook, Instagram and Twitter to stay up to date.

A special thanks to our nonprofit partners: Riverside Road Runners and Back on My Feet Los Angeles.

For the overall results of the fourth and last stop of the 2015 Lexus LaceUp Running Series, click HERE.