by | in News, Palos Verdes 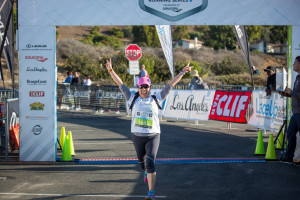 For almost 50 years, the Palos Verdes Marathon has been running as a charity fundraiser for the local Kiwanis Club of Rolling Hills Estates to raise money for children’s health, service and education. Now in its second year under LaceUp management, the race supports Kiwanis and also raises money for local non-profit Back on My Feet Los Angeles while bringing top amenities to racers such as chip timing, finisher’s medals, tech Ts, overall and age group awards, among other goodies.

After the race, Lexus offered popular post-race massages and refreshing orange and lemon water overlooking the ocean—a spa at the beach. More than 300 photos were printed out at the #LexusLaceUp Instagram photo booth. Racers could upload their race experience on Instagram and those photos would automatically be printed at the booth by using #LexusLaceUp. By doing so they also entered the contest to win free Saucony running shoes and a gift certificate to Road Runner Sports. And of course, people enjoyed an empanada and salad brunch provided by Scratch Food Truck catering and a tasty Sierra Nevada craft brew as part of their registration.

In addition to the races, Saucony held a plank competition for a free shoe giveaway to the top female and male competitor. The plank winners held the position for over 8 minutes. The popular event drew an enthusiastic crowd to cheer on the plank competitors.

For the overall results of the third Lexus LaceUp 2015 series stop, click HERE.