Palos Verdes: One of the Country’s Oldest Races

by | in News, Palos Verdes

Did you know that the Palos Verdes Marathon was the country’s second-oldest continuously run marathon? Our latest blog post looks at the history of the race, which is now part of the LaceUp Running Series.

What began as a picturesque marathon in the 1960s, has earned a reputation throughout the running community as one of the nation’s most challenging and iconic races.

Forty-eight years ago, the Palos Verdes Marathon originated as a charity fundraiser for the local Kiwanis Club of Rolling Hills Estates. The event was organized to raise money for children’s health, service and education. Each year the race acted as one of the largest fundraising events for the Kiwanis’ student scholarships, while it brought together athletes and the community year after year. 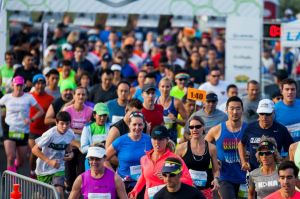 Unfortunately, organizers were faced with a dramatic rise in expenses over the past decade. Costs directly associated with traffic control, police presence, and staging began to soar, and continued to cut into the fundraising efforts of the Kiwanis.

Due to the high costs of the event, organizers concluded it was no longer economically feasible to offer the race. As this news was sinking in with the Southern California community, race director Becky Hall caught wind of the story. At that time, she was working with Mountain Sports International and the Lexus Southern California Dealers Association on a new four-stop race series in the Los Angeles area. The team jumped at the opportunity to help organize a race on this prestigious course. In 2014, the Palos Verdes Marathon was built into the new series offering a half marathon, 10k and 5k options to meet the needs of many.

Now in its second year under LaceUp, this race is better than ever.  The sponsorship by Lexus, Saucony and many other partners provide the means to cover the rising costs and create a world-class event. In addition to raising funds for the Kiwanis Club, the race proceeds will also benefit Back On My Feet Los Angeles—a non-profit which helps the homeless improve their situation through running.

The third stop of the 2015 Lexus LaceUp Running Series presented by Saucony takes place Saturday, Nov. 14, 2015 at Pelican Cove Park. Runners of the race will be treated to a complimentary catered food truck brunch and Sierra Nevada beer. Registration includes a finisher’s medal, tech t-shirt, photographs provided by Runner Buzz Media and chip timing. Event organizers and partners are thrilled to join the local community for a day of celebrating health and fitness with a backdrop of Southern California’s most scenic ocean views.

Space is filling fast to race in this scenic, challenging venue. If you want to join us on Nov. 14, sign up HERE.

Updated from a 2014 Daily Breeze article.