by | in Body, Fitness, Nutrition

Allie Fisher is an Orange County-based runner who loves the half marathon and 10K distance. When she’s not running, she’s sharing her healthy recipes and restaurant reviews on her food blog, Sweet Potato Bites.

It’s Friday night. Instead of going out for happy hour, you are staring blankly into your fridge trying to determine what’s the best thing to eat before your long run or race tomorrow. As runners, one of the trickiest things we face is determining what works best for us on a run, and more importantly, during a race.

As someone who loves food and has a food blog, I take my running nutrition pretty seriously. I want to find something that will make me feel awesome during my run, and also give me enough power to perform well in a race. While I’m not a nutritionist, here are a few things that have worked well for me before a long run (or race!).

Potatoes: I LOVE sweet potatoes, and they are often a part of my pre-long run ritual. They’re a great source of carbs, easy to digest and won’t leave you feeling weighed down the next morning. If sweet potatoes aren’t your thing, a good ol’ russet potato works just as well.

Protein: I also make sure I get to eat some protein before my runs, but I’m pretty particular about what I pick. I avoid things like spicy sausages and heavy cuts of steak, and stick to stuff like ground turkey, eggs and some bacon (because bacon=awesome). 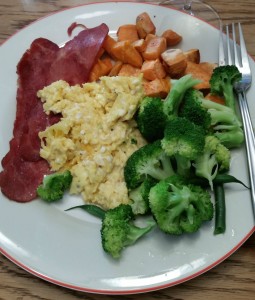 Pasta: If I’m not going the potato route, I like to have some pasta as my pre-run carb. I generally stick to brown rice pasta with just a little bit of cheese and sauce and some protein, but of course whole-wheat pasta would also work well here.

Produce: This is where things can get tricky. I love my greens, but have to be a bit particular about which ones I eat before running to avoid an excessive fiber situation. I’ll stick to the basics like green beans and broccoli, and tend to avoid things like cabbage and kale.

Bread: Sometimes my favorite pre-run meal is scrambled eggs with bacon on gluten-free bread. Again, easy to digest and gives me enough energy to get through my run or race day.

Pizza: I’ve heard many people swear by pizza before a long run, and if I go the pizza route I stick to a gluten-free crust with minimal toppings (i.e. not heavy sauce and onions on top).

Beer: Now I personally do not do this, but my husband and other people have had a beer before a long run and swear it gives them more energy. Liquid carbs for the win?