Get Movin’ with Mira: Jason Parra—a 9-Year-Old to Watch

by | in Get Movin' with Mira, Riverside 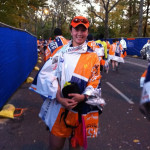 Get movin’ with Mira Reverente, LaceUp’s blogger. Ventura-based Reverente is an enthusiastic runner having completed 20 marathons and ultra-marathons. She will be blogging once a month through December, bringing you stories of inspiring runners, insider info about the series, running humor, tips, news—you name it. Tune in.

What were you doing when you were nine years old? Do you even remember what your hobbies or favorite subjects were? I know I wasn’t setting world records or outrunning everyone, just like this nine-year-old I chatted with in Riverside, at the conclusion of the 2015 Lexus LaceUp Running Series. 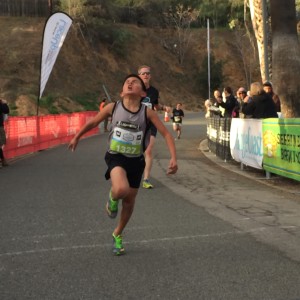 Now nine, this “boy wonder” hails from Lakewood, CA. Last year, he ran the 5k in Riverside and finished in 19:38. He was first in the 19 and under age group and ninth overall. This year, he came back and finished at 19:13, sixth overall and first in the 19 and under age group. “Over the years, he just keeps getting faster and faster,” says dad, Jessie. “It was a work in progress though—I mean he was barely doing a 6:45/mile two years ago when he started competing.”

Jason’s parents met in high school, while running for Lakewood High. Jessie continued running in college, for Cal State LA. “We can’t keep up with him now although Jessie sometimes trains with him,” says mom Hilda. “But mostly he trains with kids his age.”

Jason belongs to the Santa Ana-based Lightning Youth Running Club and practices with them three days a week on average. He proudly showed me his grey jersey as we talked about race strategy. What I mean is HE talked about his race strategy, while I listened in rapt attention to this impressive, fleet-footed youngster with an impish grin.

“I just go fast,” he says. That simple, I thought. So I prodded, “What do you mean you just ‘go fast’—it can’t be that simple?”

He explains the concept of negative splits, “I start out slow at the start of the race like everyone does then I go faster and faster towards the end.” I found his candor and matter-of-fact replies were refreshing, making me wish racing was that easy for all mankind.

Dad chimed in. “He’s actually very competitive and wants to be the best,” he says. “And he’s very focused at the start, soaking it all in before leaving everyone in the dust.”

Jessie is optmistic. “He puts in a lot of work; he’s very competitive and persevering,” he says.

Best of luck in all of your races, Jason, and see you at one of the LaceUp start lines in 2016!