by | in News, Running

In high school, Michael John Stanley was a very competitive cross-country runner with a three-mile PR of 15:12. Heading into the state finals his senior year of high school he was ranked fourth in the 3A division. Unfortunately, a motorcycle accident broke his arm prohibiting he and his team from competing in the state finals. Stanley never really got over that disappointment, and gave up completely on competitive running for more than 20 years. Two years ago, Michael began training for the L.A. Marathon in hopes of just finishing without walking. After nearly qualifying for the Boston Marathon with a time of 3:24, he was back in the running race game and hooked!

Since then, Michael has shed 45 pounds and despite two calf injuries, and has beat his qualifying time by nine minutes with a 3:06 race result at the Orange County Marathon in May 2013. 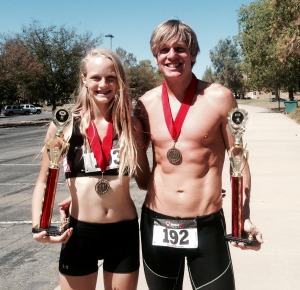 Michael John Stanley with his daughter after they both won a local 10k run in their respective divisions.

Now, he is poised and ready for his first sub three-hour marathon result in Ventura, Sept.7th. The Lexus LaceUp Running Series

is thrilled to have Michael as our Lead LaceUp Ambassador. Join us in wishing him the best of luck at the Ventura Marathon. Below is a note from Michael about what running means to him now…

I can still remember one particular evening run with my dad when I was a little boy. At the end of our runs we would always race to the finish, and

as always, he would beat me at the very last second. Except this time…I held him off, and I won!

That single moment gave me my first taste of victory, which became the foundation of so much in my life.

As a competitive runner, its the thought of winning that carries me through those long lonely training runs that seem like they will never end.

As a creative marketer, it’s the thought of winning over a cold audience with something that I believe in that energizes me to explore new boundaries.

As a father, I define victory by my little girl becoming a woman of virtue and character by following in my footsteps (Scary!).

That being said, I am very excited about joining the LaceUp Racing team, because races are where we are tested, and when we are tested, we push beyond what we thought we were capable of, and find our own personal victory at the finish line.

To date, I’ve primarily worked with Non-Profits by helping them communicate their story in a compelling way. So my hope is that this race series will generate thousands of stories full of moments that cause life change just like that race between my dad and I when I was a little boy. If this happens it means you were there, and if that happens, we will be celebrating YOUR victory together!

Oh yea and dad, thank you for letting me win that day…I really needed that!

Share your running moment with us using #LexusLaceUp on your social media posts. Become an ambassador of Southern California’s new running race series by clicking here.